The blossoms on my heirloom crab apple tree have long since faded and its now covered in hundreds of tiny green apples. She’s been working hard for months now, preparing her food for autumn, when the summer supplies of brambles and chokecherries have all been picked clean.

The Eastern Bluebird has made fewer trips into the open spaces at my woods edge lately, but I can count on his reliability each year to be among the first spring arrivals. This year, I spotted him before I even saw my first Robin. His showy blue feathers striking against the brown monochrome landscape of the early season; a harbinger of the promise of a new life-giving cycle.

The apple blossom and the bluebird; Each spring they flash onto a dreary Midwest landscape with promise and predictability, bringing with them beauty, wonder, abundance, and stability. Extending their gifts freely, they give unconditionally and only ask us to appreciate and accept them in return.

This fall I caught my first glimpse of a Great Blue Heron. I just so happened to be looking out my picture window and gazing through the trees to the creek below. It was thrilling to watch it move along the creek, hunting in the tall grasses. I knew that this one would be on my art “to do” list soon. And so here it is, all finished now. I hope I was able to capture it’s essence, in all it’s magnificence.

“Then God said, “Let the waters teem with swarms of living creatures, and let birds fly above the earth in the open expanse of the heavens.” – Genesis 1:20

Two new species that 2019 brought to our property was the ever elusive Wood Thrush and the little appreciated Pokeberry plant, providing me with further inspiration, wonder, and understanding. I’ll let this post rest there and leave you with my latest work.

“He has made everything beautiful in its time.” – Ecclesiastes 3:11

Last year around this time I wrote a post about the Gray Catbird’s fall migration from my property, entitled “Farewell, Gray Catbird.” And so I feel this year needs a revisit to the post now that another Gray Catbird exodus is upon me.

The 2019 spring bird migration brought with it a slightly different dynamic than did 2018. The places on my property they previously seemed to like the most were in direct correlation to the fact that I hadn’t had the opportunity to do some badly needed plant control and forest management. I purposely approached many of these areas with an easy hand this year, but it still seemed rather severe when I looked upon the freshly opened spaces in early spring. Would the same birds come back to the area? What about my beloved Gray Catbirds?  Soon, time and its spring arrivals proved that all my worrying had been unnecessary. The Gray Catbirds arrived! And then they arrived some more. And then they had broods. And by July the entire property seemed to be filled with their flicking tails and noisy mews.

These birds are known to be “elusive” and “hard to spot”.  My Gray Catbirds have definitely overcome their shy tendencies. Every morning this summer as I worked in my gardens around the house, a Catbird would fly out of the woods just to perch on a nearby tree and mew at me. As they grew more adamant in their noise making (and annoying), often I would remind them that they inhabit my property and life here was pretty good for them, so they just needed to relax. Using pragmatism didn’t avail to them much, so in the end, I told them they were just going to have to deal with my presence. They responded with the now broken record response of “mew” and provided me with a summer full of fun (and noisy) bird watching.

So here I am again. It’s mid-September and the inevitable is approaching. I’m remaining diligent about recording my bird sightings each day so I don’t miss it.  It happens so quietly, like an exhale. One day it’s an unusually warm autumn afternoon and all of nature is around; the Phoebe is dancing in mid air for its catch, a few Hummingbirds zoom by, and I spot a Painted Lady fluttering among the Autumn Joy Sedum.  Amid the activity I can always hear Catbird calling. Calling to me, I imagine, bidding farewell to another splendid year. It sure was a good one this year! I stand and listen and wait, and take everything in. The next morning brings the familiar low dark clouds of Wisconsin autumn, and as I walk through the edges of the forest, the mews have become silent. They are all gone now.

“Look at the birds of the air, that they do not sow, nor reap nor gather into barns, and yet your heavenly Father feeds them. Are you not worth much more than they?”   – Matthew 6:26

It moves quietly in the shadows of the forest.

Like a mist, fading in and around its surroundings.

A flickering wisp, lingering without a sound.

A thought, then it vanishes.

Among the shadows, ever watching.

There is never a lack of inspiration here in the summer, only the lack of time to put down all my ideas. This summer has been no different, and life has been busy for me with everything else except artwork. This piece took me 4 months to go from concept to finish, which is not what I had in mind, but nonetheless I feel happy about how it turned out. Sometimes taking a long time on art is exactly what it needs to be crafted properly!

“He will cover you with his feathers, and under his wings you will find refuge.” -Psalm 91:4

These wonderful little birds have captured my imagination since the day we moved here. Throughout the year I can hear their distinct calls all around the forest, though have to watch closely just to get a glance at one. In the winter however, the bird feeders get hung up and they become a welcomed mainstay throughout the dark cold months. There are many things I dread about the harsh winters here, but come feeder season, I find myself looking forward to the time spent watching my winter “friends”. In the spring, they are back to the woods!

I’ve delayed posting this last painting, which I finished just before Christmas, as I’ve had a hard time creating a story to accompany it that I thought was good enough. So, perhaps this time simplicity is best. I painted this for a gift for a family member, and it’s a scene of my grandmother at her house on “the farm”, that the family has affectionately come to know so well. She was dear and beloved to all who knew her, and even though it’s been 14 years since Mamie went home to be with her Lord and family before her, I still found myself getting teary eyed at times while painting this. I’ve added a very brief story of her life after the photos, just to attach a bit more history to the picture if you’re interested in further reading.

Mamie was born in 1909 in Detroit, Michigan. Both her parents were first generation Americans from German immigrant families. They spoke fluent German as well as English, though Mamie and her brothers were raised to speak only English. As a girl, she grew up in Detroit, in what was then considered a nice middle-class neighborhood. She had 3 brothers, one of whom died of Polio at 2 years old. Her mother had battled sickness on and off for most of her life, and when Mamie was 9 years old, her mother died of gall bladder complications at the age of 36. Shortly afterwards, her grandmother moved in with the family and helped her father with the children. She met her husband, Louis, on a street car in Detroit and was married, age 20, in 1929. Mamie & Louis started their family in Detroit, raising 4 children through Chicken Pox, Measles, Whooping Cough, and Scarlet Fever. After WWII, Louis lost his job at the war plant in Detroit, and the family moved to Springport, a small country town in southern Michigan to make a fresh start. Her life turned to farm work, and the family of 6 lived for awhile with no electricity, running water, indoor toilet, or telephone in a 3 bedroom house.  She and Louis raised 3 more children along the way (finally adding electricity and indoor plumbing); the last two children being twins, born when Mamie was 42 years old. Mamie & Louis celebrated their 50th Wedding Anniversary in 1979, and just a year and a half later, Louis died from heart failure at age 75. After her husband’s death, Mamie lived alone on the farm for nearly 20 years, until she moved in with family.  Family was the most important thing to her, and upon her own death at 95 years old, she left behind 7 children, 21 grandchildren, 29 great-grandchildren, and 1 great-great grandchild. Due to the times she lived in, Mamie’s life was not easy, being filled with the hardships of poverty, sickness, and death. Though despite her circumstances, she was always able to give love, and taught us about the unconditional and abiding love of the Lord just by being herself.  Mamie made such an impression upon us that 14 years since she went home, she is still remembered, loved, and missed by those she left behind. 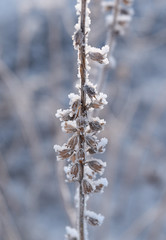