These wonderful little birds have captured my imagination since the day we moved here. Throughout the year I can hear their distinct calls all around the forest, though have to watch closely just to get a glance at one. In the winter however, the bird feeders get hung up and they become a welcomed mainstay throughout the dark cold months. There are many things I dread about the harsh winters here, but come feeder season, I find myself looking forward to the time spent watching my winter “friends”. In the spring, they are back to the woods!

This painting was fun to work on, as this guy has become one of my favorite birds here. The Gray Catbird migrates to SW Wisconsin every spring, and our property has become a favorite hangout of theirs. Dark gray in color, they are easy to miss among the more colorful bird species, but if you take the time to watch and listen, you’ll find they make up for it in character. Their characteristic “cat-like” call is where they get their namesake, and while walking through the woods, or even down my drive, I always know where to spot them because I can hear them first. And if you ever get the opportunity to observe one up close, the subtleties in their color are a beautiful understatement, and they might just have a berry in their mouth!

Finding these beauties growing in my woods. 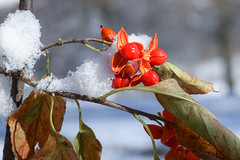 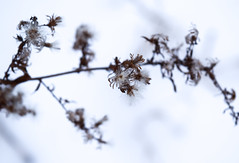